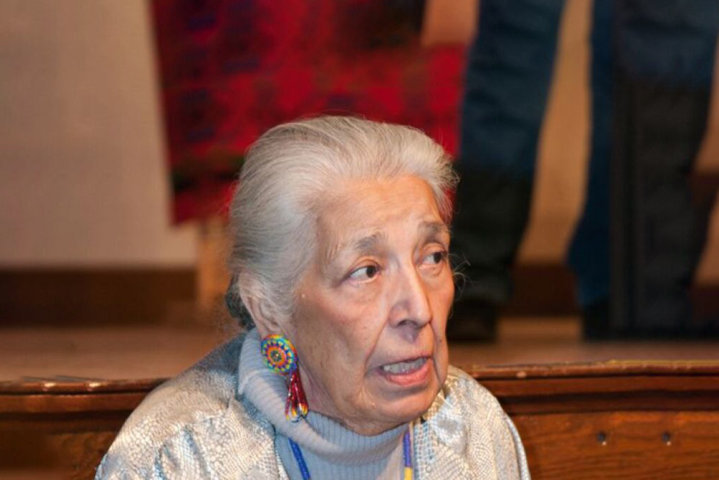 At the senior residence Symphony of South Shore, Ms. Susan Kelly Power passed away on Saturday due to complications from Alzheimer‘s illness. She was 97.

“She was proud of her Yanktonai Dakota heritage and of being descended from a line of hereditary chiefs, including her great-grandfather, Chief Mahto Nunpa,” her daughter, Mona Susan Power, wrote in an email.

“Her mother, Josephine Gates Kelly, was a revered leader who ultimately became chairperson of the tribe in 1946. [Ms. Power] greatly admired her mother, and sought to follow in her footsteps, eventually becoming an activist leader herself.”

Ms. Susan Kelly Power worked at various places throughout her career, including the Museum of Science & Industry, the Salvation Army, and the Census Bureau. When she was younger, she worked in a factory; later, she proofread legal journals for the University of Chicago Law School. Her preferred position was at AC. McClurg’s Book Distributing Company, according to her daughter.

“Susan was a voracious reader who loved nothing better than being in the heart of the book world, meeting authors, enjoying advance access to forthcoming titles. She regularly visited libraries and used bookstores throughout the city, gradually putting together her own impressive collection of books on Native American history,” Mona Susan Power said.

According to her daughter, Ms. Power played a crucial role in the Chicago Indian Village movement in the early 1970s, which was a protest against the subpar housing and job prospects offered to Native Americans who were lured into cities.

“She had a strong voice, and when something wasn’t right, she did not hesitate to speak up about it,” said Cyndee Fox-Starr, whose parents were friends of Ms. Power.

“She continued to have that voice within the community right until three or four years ago, when her health declined,” Fox-Starr said.

Among other honors, Ms. Power received a leadership award from the American Indian Center and the 2012 Unsung Heroines Award from Cook County, which was given to her by Toni Preckwinkle, president of the Cook County Board.

Ms. Power noticed that there was no sign or monument in Harvard Yard identifying where Harvard’s Indian College formerly stood when paying a visit to her daughter, who studied at Harvard in the 1980s. She was invited to join a committee run by the Harvard University Native American Program after making calls and sending letters, and a plaque was placed there in 1997, according to Mona Susan Power.

One of the speakers at the plaque’s unveiling was Ms. Power.

In the Standing Rock Sioux Reservation near Fort Yates, North Dakota, Ms. Power was born in 1925. She was of American nationality and white ethnicity. Her mother was Josephine Gates Kelly, the name of her father isn’t available.

Susan was a woman with a living family which used got include her husband who unfortunately passed away and their kids.

Carleton G. Power, Ms. Power’s late husband, died before her in 1973. She is also survived by her daughter, a stepson named Douglas Power, his spouse Jeanann Glassford Power, a stepson named Marjorie Mbilinyi, and five grandkids.